Then Simeon blessed them and said to his mother Mary, “This child is destined for the falling and the rising of many in Israel, and to be a sign that will be opposed so that the inner thoughts of many will be revealed- and a sword shall pierce your own soul too.” Fifteen years ago, when I was a missionary pastor in Lithuania, I celebrated Candlemas or the Feast of the Presentation of Our Lord for the first time in our stately, 17th century Baroque church 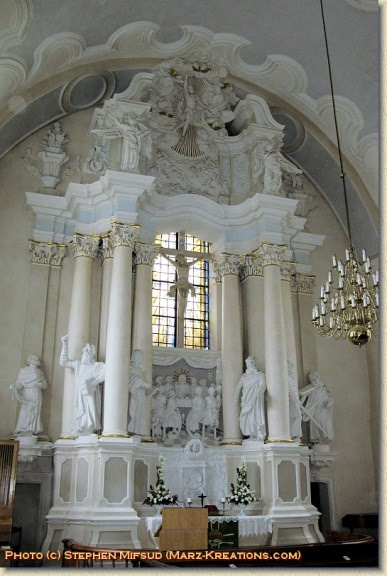 in Vilnius. There was very little heat in the sanctuary, and frost covered the 20 foot windows lining the walls of the church. When the congregation sang, you could see their breath. As the morning sun crept higher in the sky, the beams of light touched the white statues surrounding the altar, and then gently landed upon the petals of the last red Christmas poinsettias adorning the candles. There was a wonderful sense in that frigid space that spring was not far away.

Of course, I had been aware of the February 2nd, or Ground Hog’s Day since I was a child, but I never really understood the liturgical significance of the day. Historically, the day was always a holy day on church calendars in Northern Europe, and German immigrants brought the tradition of the Ground Hog to the American colonies.

According to St. Luke’s gospel, the infant Jesus was carried by Mary and Joseph to the Temple in Jerusalem on the 40th day since Jesus’ birth, which is February 2nd, the 40th day after Christmas. It was during this visit that the old prophet Simeon, who had been assured that he was to see the Messiah before his death, saw the  couple and their infant son Jesus walking across the Temple. Having seen the infant Messiah, Simeon took the child into his arms and announced, “Now, oh God, I can leave this world in peace- for I have seen my salvation.”  He then continued his prophecy with the word that Jesus would be the light for all the world. This of course, plays into the tradition of seeing your shadow.

But there is a richer tradition as well, that I experienced in Vilnius which has stayed with me over the years- more than simply marking the 40th day of Christmas. Candlemas is one of the great cross quarter days which makes up the seasonal wheel of the year. It falls midway between the winter solstice and the spring equinox and in many Northern European traditions is considered the beginning of spring. Poignantly, it is also a day which serves as a theological bridge between the season of Christmas and the penitential season of Lent. In the clear and poetic voice of Simeon it moves our own eyes away from the joy of Christ’s nativity toward the cross of Calvary. It is there, like Simeon, that we are given the assurance that we need not fear death. “And a sword shall pierce your own soul.”

This year, I will be celebrating Candlemas at St. Saviour’s Church in Riga, Latvia- a congregation that my wife and I re-established after the break-up of the fall of the Soviet Union. It will be my first time to preach there since I left  20 years ago. I wish you could be there too, but I invite you instead to celebrate the wonder and majesty of Candlemas close to home at Lake of the Isles on Sunday, February 1st at 9:30.