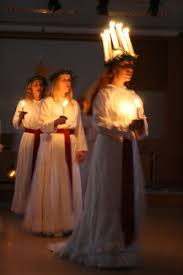 St. Lucia was a young Christian of Sicily who was martyred in 304 AD during the persecution under Emperor Diocletian. According to tradition, she had decided to devote her life to God and to give her possessions to the poor. In Sweden in the late 1700’s, there were legends of a woman appearing in times of great famine distributing food to the starving. Perhaps because the name “Lucia” means “light,” and since her feast day fall on December, the week that marks the darkest days of the year, these stories were in turn attributed to the goodness and generosity of St. Lucia.

St. Lucia will make her lighted appearance as a part of the Sunday School Children’s program at Lake during worship on Sunday, December 17th. The Sunday School will present a retelling of the story of Jesus’s birth from the book of Luke through the eyes of Mary telling Jesus of the night he was born. The program will includes reading, singing and bell ringing- and of course, they will wear costumes for grandparents’ photo opportunities.