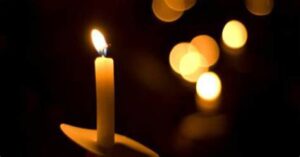 This year, Candlelight Service of Holy Communion is in-person & live-streamed, as we celebrate the mystery of the Word made Flesh.

The LOTI Church Choir, with guest musicians will perform a pastoral mass by a 20th century British composer. Colin Mawby, who lived in Ireland and wrote most of his music for the Roman Catholic Church in Germany.

The Pastoralmesse is a common, liturgical form used in Central Europe at Christmas and is intended to serve as Mary’s lullaby over the manger.