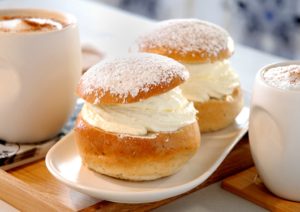 In the days before Ash Wednesday people traditionally celebrate by enjoying special foods and customs. The word Carnival which means “farewell to meat” and Mardi Gras or “Greasy Tuesday” offer a hint at the foods that were once forbidden by the church during the penitential season of Lent.

In the English tradition, people were encouraged to use the fat and eggs to make pancakes before Ash Wednesday. In Central Europe, people eat jelly filled doughnuts, and in Scandinavia families eat Lenten buns. Often these are made with fresh cardamom and filled with whipped cream and  marzipan. 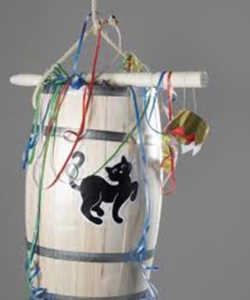 In Denmark there is a special children’s party tied to the Sunday before Lent known as
Fastelavn Sunday. Of course, everyone eats the special Lenten buns, but the children also try to break open a wooden barrel filled with chocolates and sweets. They arrive at the party dressed in costumes, so nobody knows who is hitting the wooden barrel with awooden stick. But the one who wins, is presented with acrown. In the middle ages, black cats were associated with the devil, so a cat was placed inside the barrel. After being attacked from all sides, the cat escaped from the barrel and was never seen again taking all the evil with it. (Fortunately, Danes don’t have a cat in the barrel anymore, but it is alwayspainted on the side.)

Fastelavn will be celebrated after worship in Fellowship Hall. Kids are welcome to bring their own costumes or use the ones provided after worship for some fun festivities. Bring your strong arms to try and break open the kitty. Candy is sure to follow!