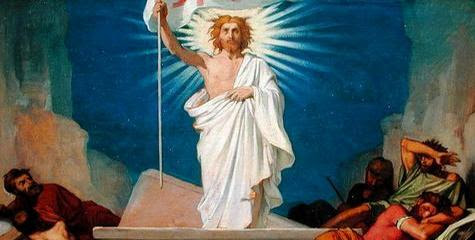 “So they went out and fled from the tomb, for terror and amazement had seized them; and they said nothing to anyone, for they were afraid.”   Mark 16:8

For many Christians today, the story of Jesus’ resurrection has lost its element of surprise. We know that death does not have the final word on Easter.  We may feel a bit remorseful about Jesus’ death on Good Friday, and we may even feel a tinge of guilt as we meditate on his suffering and death. But we have grown so accustomed to expect that Jesus will rise again, that we overlook the tragic and wonderful sense of surprise. This was not true for the earliest Christians. They knew the taste of death, but they also savored the surprise of the resurrection.

The oldest written texts of the Bible capture this surprise. The earliest manuscripts of St. Mark’s gospel close with the verse, “So they went out and fled from the tomb, for terror and amazement had seized them; and they said nothing to anyone, for they were afraid.” St. Mark doesn’t even state that the disciples saw the risen Jesus. The women who went to the tomb early in the morning, simply left filled with terror and amazement. Instead of expectant joy, they were afraid.

Within a generation or two, however, the sense of surprise for the resurrection seems to have disappeared for the Christian church, and so the later editors of the gospel felt it was important to include additional scenes to complete the story of Jesus’ life, death and resurrection. (If you look in your Bible, you will actually note the Biblical scholars comments marking, “The Shorter Ending” and “The Longer Ending.”)

Of course, as an “Easter People” it is difficult to wear blinders and to avoid seeing the resurrection as we read the story of Good Friday and Easter. After all, we do know what happens, and we expect to find the tomb empty.   But I don’t think that being struck “with terror and amazement” is about merely overlooking the resurrection until the right moment. The wonder and surprise of Easter is about experiencing the possibility of a new life and resurrection. Death and loss may have touched your life this past year. All your hopes for the future may have been dashed. You may have buried your own passions in an often visited grave. But Easter is about surprises, and if Christ could rise from the dead just imagine the possibilities he can do in your life. That was the excitement the women felt that first Easter morning, and why they said nothing to anyone, for they were afraid. They wondered instead whether the surprise could really be true.

My friends, as we celebrate Easter again this Sunday, may you be filled with surprise, wonder and awe at the possibilities Jesus is offering you.

Christ is risen! He is risen, indeed!