When Janna and I were serving as missionaries in the newly independent nation of Latvia following the break-up of the Soviet Union, we were quite surprised to discover the difference and the confusion in New Year’s Eve traditions. In the textbooks of the Soviet Union, students had read about the New Year’s Eve traditions celebrated around the world. Regardless of their geographic differences, according to the textbooks, people sang “New Year’s songs,” and they decorated their “New Year’s trees.” They even gave one another “New Year’s presents.” In the Soviet textbooks, the festival of Christmas was not even mentioned except for an a footnote where it stated the British had a rich tradition of music called “carols.” These songs were reportedly sung a few days earlier than December 31st for a lesser known English festival called Christmas.

Over the course of the past 20 years, many of the “former” Christmas traditions have returned to their proper place on December 24th, but there are still some unique New Year’s Eve traditions for December 31st. In Latvia you must still eat a bowl of gray peas with bacon bits before the stroke of midnight, otherwise, the remaining peas will foreshadow your tears in the new year. In Germany and Austria, families melt tin or lead and pour the molten mass into cool water. They then spend the rest of the evening interpreting the meaning of the new forms. In other parts of the world, churches gather in prayer in the hours before midnight. Perhaps the most common traditions are the ringing of church bells and the explosions of fireworks at midnight, and of course, the obligatory sipping of champagne. It seems, all people want a little preview of what the new year will bring.

In Slovakia, we experienced a mixture of the sacred and secular. As the church bells began to peel, it seemed as if the bells were singing an old Slovak hymn, called Rok Novy- or New Year. The text of the song was translated by the late Slovak-American hymn writer Jaroslava Vajda into the hymn “Greet Now the Swiftly Changing Year.”

This Jesus came to end sin’s war; This name of names for us he bore.

Rejoice! Rejoice! With thanks embrace Another year of grace.

His love abundant far exceeds The volume of a whole world’s needs.

Rejoice! Rejoice! With thanks embrace Another year of grace.

I meditate upon that simple text every New Year’s Eve. In spite of the gray peas, the molten tin, and the bubbles in the champagne, we really don’t know what the new year will bring. But we do have the assurance that “God’s love abundant far exceeds The volume of a whole world’s needs.” For me, that is good news. I can look at the new year ahead and rejoice. Indeed, God has given another year of grace. 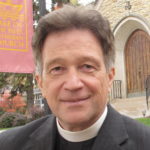 Pastor Arden Haug began his ministry at Lake of the Isles in January 2013. His colorful and innovative use of music, liturgy and the history of the Lutheran Church has evolved over 25 years of ministry in Minnesota and in Europe. Pastor Haug’s doctoral studies in homiletics or the art of preaching are reflected in his personal, relevant and often humorous and inspiring sermons.